skip to main | skip to sidebar

It was about 10am, Rick & I had just done a 7km run, on only a few hours of sleep, so we were starved for some good wholesome food, & this you can find @ Badde Manors :)

We started off with our usual pots of Chai Tea (pots with an 's' because it's so good i want one teapot all to myself!) & Wensy ordered a cup of Indonesian spiced tea.

They had upgraded their menu's from black print on white paper, laminated, to a nice three paged fold out of a nice woody brown background - this was much nicer to read off :) 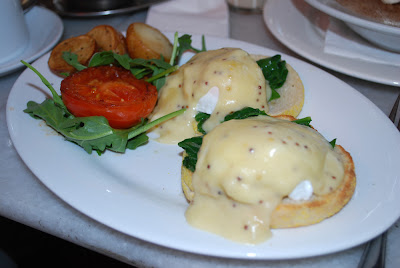 I went with the Eggs Florentine. Two poached eggs on a bed of wilted spinach on english muffin, with roast tomato & roast chat potatoes. I forgot to mention that i liked my eggs extra runny (i ALWAYS forget, i wish places would ask what we would prefer??). There was a good amount of spinach, (too much and the flavor gets overwhelming, especially if they didn't add any flavours), the muffin was soft, not really toasted enough for me (i like my english muffin extra crunchy smothered with butter). The tomato & chat potatoes were a nice addition to everything, & filled me up just enough. 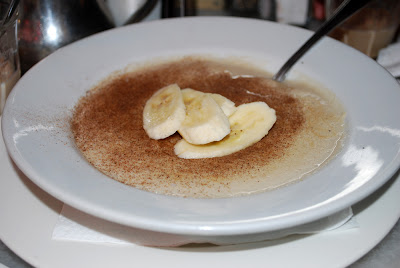 Rick ordered the Oats with cinnamon & banana (since he's on this no-wheat no-dairy detox) so it was made with Soy milk - this made a majorly huge difference. The oats was creamy, and soft, i think honey was mixed through, topped with a few slices of banana (not enough banana me thinks) & with cinnamon sprinkled on top. All in all, this was the best oats i've ever had, & i think i'll be having oats for breakfast this week :) 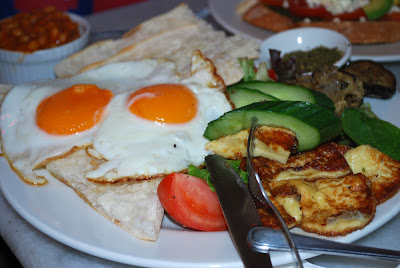 Wensy chose the Mediterranean Breakfast - i had this last time the review can be found here. She didn't get any olives though - so at the end we told them & they brought us out a mini bowl of FIVE olives. haha Five only!! 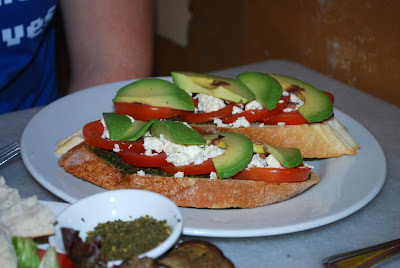 Ben got the pesto tomato goats cheese & avocado on toast. This looked to raw & plain to me, also i don't think i'm a fan of pestO? I haven't tried it before but i just seem to think that i wouldn't really like it..

Even coming here three times already, there are other things i want to try on the menu (i haven't eaten lunch here, but i saw a tasty cheese platter i'd like to try out!). I love Glebe, it's such a laid back suburb, parking wasn't too bad for a Weekend morning, & the book shops i adore except we didn't have time to browse today!
Posted by Two fit and fun gals at 7:46 AM 6 comments:

Twas my little sister's birthday party coming up, so i put in an order

for a FreshCakes Cake from Jane - i chose Black Forest. I didn't want

a heavy chocolatey cake like mud cake or chocolate fudge, so i thought

Black Forest would be a good choice.

& boy, was it a good choice :) The Boyfriend made a trip to

Marrickville to pick up the cake (unfortunately for us she didn't

deliver to the Western Suburbs) & was driving home under the speed

limit to make sure the cake stayed in one piece (thanks baby!!)

I didn't get to see it until the next morning, i had to rearrange the

fridge to make room for the massive box. Movements of egg cartons,

left over dinners from the week, some asian sweets & fruit - the cake

sat safely until it was time to come out again. I had some good

friend's offer their fridge space, but mom said it'd be easier to have 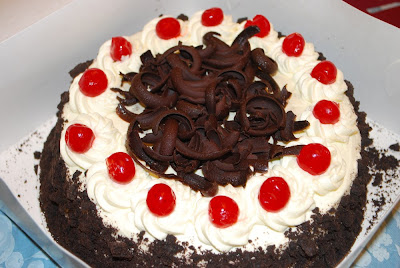 Birthday cake cutting + candle lighting + candle blowing time came (i
purchased some 'magic' candles, that flickered back on after being
blown out heehee).
When i cut into the cake, i could tell that it was so moist, the
section kind of sunk down, chunks crumbled down, was very very careful
when rationing out to all the teenagers outside, but still ended up
being very messy boo :(
My turn to eat cake. WAIT!-have to give my friends some too haha
almost forgot =P
Rick is on a no-wheat no-dairy no-to-alot-of-foods-diet, so he didn't get any. 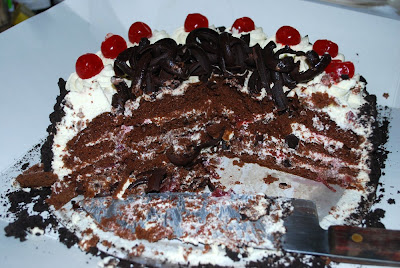 I, though, had like three slices because it was so so moist, perfect
cake-to-cream ratio (just like the other two cakes i had tried from
Jane). Topped with whipped cream, & glazed cherries, with a lot of
chocolate curls on top. 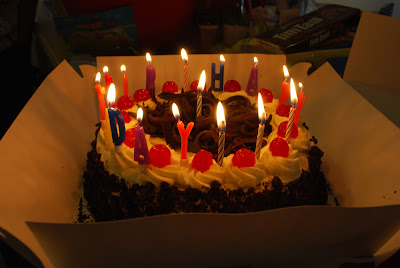 Even my mom and the oldies liked the cake - my mom usually complains
'oh it's too sweet' but she loved it - and praised me for getting such
a nice cake :)
I would most definitely order the Black Forest again, but not until i
try a few other of Jane's creations!!
Posted by Two fit and fun gals at 7:38 AM 2 comments:

I've had these cake mixes in the pantry for a while now, but just never got around to baking anything. One night after work, had nothing to do, had too many ferrero rochers lying around from easter, so i put them together :)

Half gluten free, since the cake mix was gluten/wheat/dairy/yeast free - but ferrero rochers aren't. 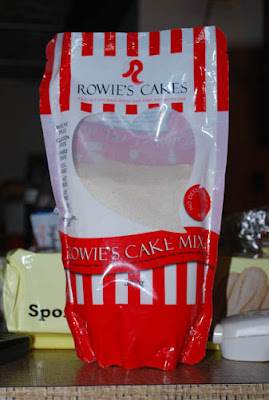 We had fun chopping (and eating) our way through about 15 chocolates. 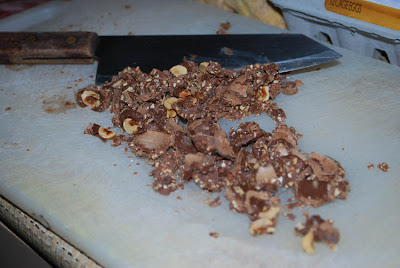 I made use of my love heart mini cupcake cases, into the oven they went. 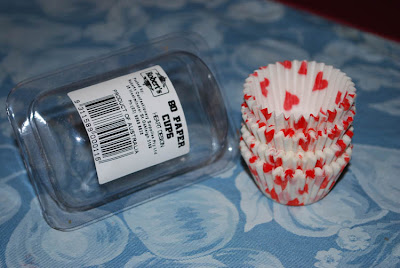 Not long after, an aroma of cinnamon filled the house, we kept the oven light on & watched our little babies rise. 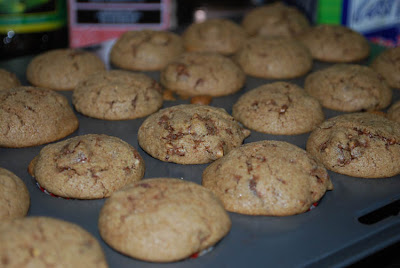 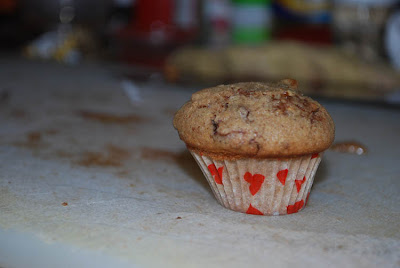 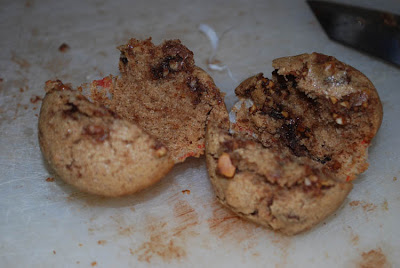 There was a little batter left so Rick made an origami box, i was sure that this wouldnt work and we'd end up with one big fat pancake looking cupcake - but i was wrong lols =P 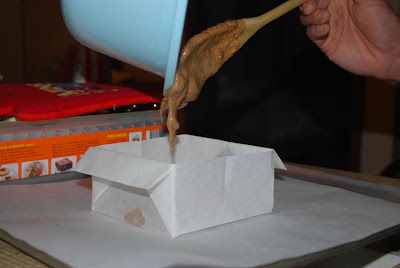 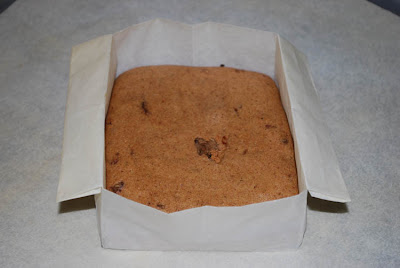 Made little take away boxes for Ann, Jeremy, Anita, Sam & Julie, and kept a few for my family, & Rick took the box home with him. 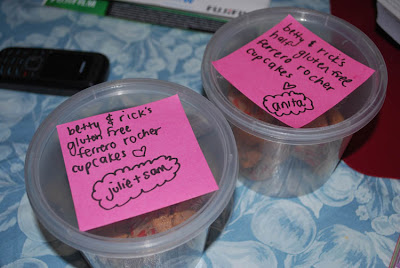 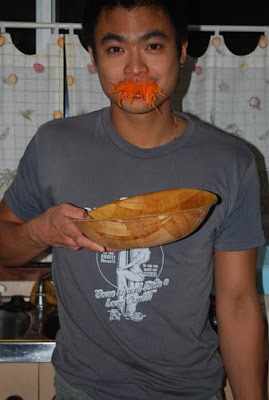 I originally wanted to add grated carrots instead, and top with cream cheese icing, but my sweet tooth took over.. but the carrots didnt go to waste hehe! I'll use the other packet of cake mix for my half gluten free carrot & cheese cake delights!
Posted by Two fit and fun gals at 12:34 PM 5 comments: